Portrait of Fernanda and Notes on Process

This is an edited re-posting of of something I wrote a few days ago, hopefully free of blather. I picked up a virus from the kids and while they recovered quickly I developed pneumonia, a condition I am predisposed to. The last time this happened my fever spiked at 105.F and I wrote madly from my hospital room, fully under the influence of fever and meds. Alright so far, and then I hit “SEND”. A little later Naomi arrived and confiscated my laptop.

So I should have know better that to write and publish now. I have separated out the con-jumbled issues into two post. This, the first, is on art, Fernanda, her marvelous life, the umbrella of her sunshine, and my marvelous, forgotten pink painting. Maybe in he next post I will address the surprising discovery of liver cancer.

A current portrait of Fernanda Fernanda Sosa in her Caracas living room. A most cherished friendship. She is sitting in front of a painting I had almost forgotten; mixed media on printed upholstery fabric. The fabric was a cotton/linen blend of English origin. I wish I could find more.

I painted on the back, where the bleed from the repeated floral print was more subtle and more lovely than the actual print on the face of the linen. The added benefit to working on the back was that there is no Scotchguard to repel my paint. Later I discovered transparent gesso which would have sealed and protected the raw fabric from the materials I used in the painting. In that time concerns about archival quality were not topmost on my mind.

The painting was from a series that I called my “Rockheads”. It was a familiar process that began with unrolling a bolt of raw canvas, (or printed upholstery material) – onto cracked and broken lengths of sidewalk. I would mark out portrait or landscape-oriented rectangles as I went down the line and fill them with charcoal impressions picked up from the sidewalk. From there to the studio walls (I had forty foot long studio walls) and standing back and meditating on suggested images.

These paintings were process pieces that slowly cohered over time. I sharpened suggested images with charcoal, pastels, scrubbed in clear binder, continued with colored latex or acrylic washes. From there to solid color and finally to oils for finishing. Running out of inspiration on one image I would move down the line to work on another until ideas returned. Some of the discreet pictures grew into one another until they became inseparable, more challenging and interesting. When finished I cut them apart and stretched them.

This was a way of working carried over from a childhood of tracing images in the clouds and faces in the wood grain when I should have been focusing on math and science as I sat at my little wooden desk. I have never tired of it.

After reading “The Success and Failure of Picasso”, by John Berger, I went through a time when I looked at my work and judged it rather harshly, seeing it as too facile, too easy.  It was a way of working I enjoyed and that came naturally but my half-WASP background got in the way of total enjoyment and acceptance.

Picasso’s ultimate failure, according to what I took away from Berger, was that in his later years his subject – that being himself – was too small. He needed a larger subject. Not something to go into here but I puzzled over implications for me and my subject. I considered my subject to be my life, my stories, my recovery. My engagement with art was a major part of my recovery from a life that up to a certain point had truly not been very well or wisely lived. Art was essential to my healing and continued emotional and spiritual growth and continued well-being. I let go of the thought that my subject might be too small. It was necessary work that served an essential function. 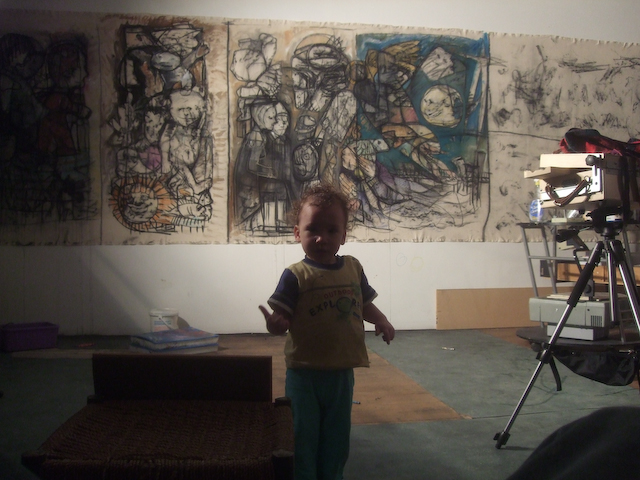 How the paintings begin, with Ada at 2 years. 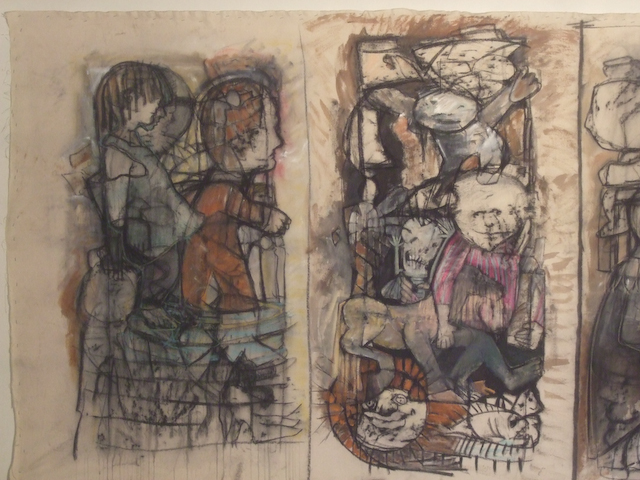 what they can become, over time

7 Responses to Portrait of Fernanda and Notes on Process