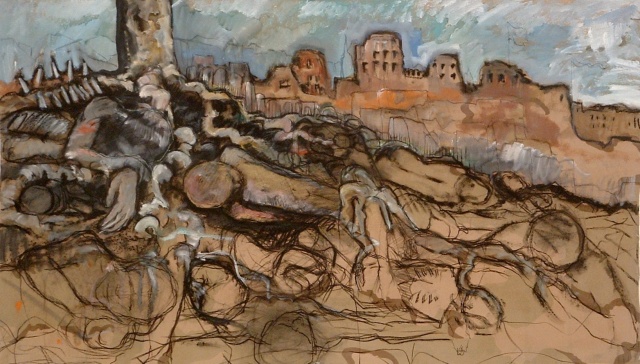 A couple of weeks ago I posted a notice about Google’s 10 to the 100th project. You know, Google’s call for ideas that could change the world and offer to fund the most popular to the tune of $10,000,000. Deadline is Oct. 20. I suggested a collaborative, web-based approach, using this or some other blog to work on ideas collectively. Blog hits went through the roof because of the tags but most had nothing to do with me and since I didn’t get any takers on the idea of a collective project I took the post down. Probably should have left it up but I felt freakily self-conscious about the attention.

The days go by and and I’m thinking, well, you know, I could have thrown out an idea. Just to give people something to start with. What could I come up with if I was trying to think of a project that could change the world in a positive way? Even a little thing. Even an itty-bitty little thing.

Well, I thought of something but kept it to myself except for emailing friends for feedback. I got all jazzed up and then I crashed and now I’m sick of the whole thing and want to drop it. It’s that sense of self-consciousness again, that uncomfortable feeling that I could have kept my mouth shut and let people wonder how dumb I was but no, I had to go and tell them.

This is how I flip flop. Think of something, say it out loud, wish I hadn’t. That’s the flop. The flip side is I know that often the only way to get to the good idea is through the string of half-baked ones. The road to success is through failure, my dad used to say.

So I’m going to do what I thought of originally, post an idea on the blog and ask people to shoot holes in it, offer corrections, refinements, or tell me it’s already been done and suggest I scrap the whole thing and move to something new.

Anyway, here’s the idea. If anyone would like to pick it up and run with it please, feel free. I am still most interested in a collaborative effort.

My idea is to create a web-based global registry for Conscientious Objectors, Pacifists, Refusniks, War Resistors, their families, friends, and supporters; and a Social Networking site along the lines of Facebook, where people could begin to build an international, multi-lingual community in real time, and in real time could talk, correspond, share and compare experiences, educate, etc. They could also respond to threats, intimidation, harassment, and the incarceration of its members, much in the way an event can trigger a massive response from Amnesty International.

This idea came to me because here at UWC-USA (where my wife works and where we live) we are very aware that a recent graduate, Mia Tamarin, an Israeli teenager and a Conscientious Objector, has been jailed in Israel for refusing induction into Israeli compulsory military service. Here at the school we have 200 students, 17 and 18 years old, from 90 something countries. We live in on campus in an incredibly beautiful place with some of the smartest kids in the world. We have kids from all the trouble spots. You name it, they’re here. And once they get here they have to work out their differences or the experience just won’t work. More often than not they come to see themselves as Citizens of the World.

Mia’s experience led her away from seeing the wall dividing the Israelis from the Palestinians and the occupation of Palestine as necessary and good to seeing it as harmful, degrading and in the long run counter-productive to the best interests of Israel. A commitment to Pacifism – to conversation, negotiation and mediation, and to her people was, as far as I know, the basis for her refusal when she graduated and went home. She knew what the consequences of refusing military service would be and prepared herself.

And while perhaps her family would have made other choices, her friends understand and everyone who knows her well recognizes that with this decision she is speaking her truth. People want to help her. Her friends want her actions to help make a difference on a larger level. However, they depend upon an email chain for news and discussion and altogether have no more clout than any other small group of teenagers protesting injustice anywhere.

Since dreaming up this idea of an international registry I have discovered that other organizations have been doing this quite effectively for years:  documenting Pacifism through registration in order to create paper trails for individuals facing hearings; providing trainings, resource materials, links to outside resources and a bulletin board for notices of events, conferences, popular and scholarly articles, and issuing alerts concerning the intimidation, harassment or threats to C.O.s.

In other words, these organizations provide critically needed clearinghouses of information and resources, and all credit goes to them for the courageous work they have been doing for years. But, as far as I can tell they have not yet begun to really tap the potential of the web to explain Conscientious Objection and the Pacifist Movement to the public and to attract individual C.O.s, their families, friends and their supporters, and to give them the tools to build a real-time community of their peers on-line, and help them mobilize membership drives, (especially of teenagers and students and their supporters), and to organize and present educational ventures and massive critical response potential triggered by any threat to its membership.

(Please correct me if you are aware that I am wrong and it seems I am suggesting we re-invent the wheel.)

So I have moved from the idea of creating this organization from the ground up to the idea of proposing inviting the existing organizations to work together to create a central, multi-lingual web-based clearinghouse for all they already offer; to begin to investigate how they might utilize the web to its potential; to become a free hosting service for websites and bloggers, and especially, to establish a real-time on-line community of C.O.s, War Resisters, Refusniks and the like and their families, friends, and committed supporters. Something on the line of facebook but without advertising. Or perhaps to make use of Facebook and all the other social networking services instead of trying to create a new network from scratch.

Well, that about wraps it up. How much would we need from Google to fund this? I don’t know. The cost of a stamp maybe, or a telephone call to someone who could set these ideas in motion. Maybe we don’t need Google at all, just, as Paul says below, their technical expertise and some of their programmers willing to donate their time.

Here is a partial list of existing organizations currently registering C.O.s or providing support. It is a quick list so please email me with others if you know of them . (Or list them in the comments.) If I include Peace Groups there are dozens, hundreds, who knows how many more.
peaceabbey

This is a registry created by the U.S.- based Peace Abbey in response to the 1st Gulf War. Articles and links and a place to register as a C.O. and begin a paper trail.)

Here one can register to begin a paper trail and there are many resource links.)

Exceptional resource. Founded in 1921. International sections and associations, resources, contact info, international conferences, publications. I could be wrong but at a brief glance it seems to be geared for adults, activists, leaders rather than teens and the individual resistor. War tax resistance resource. Threat alerts.